Lessons I have learned from horses around the world 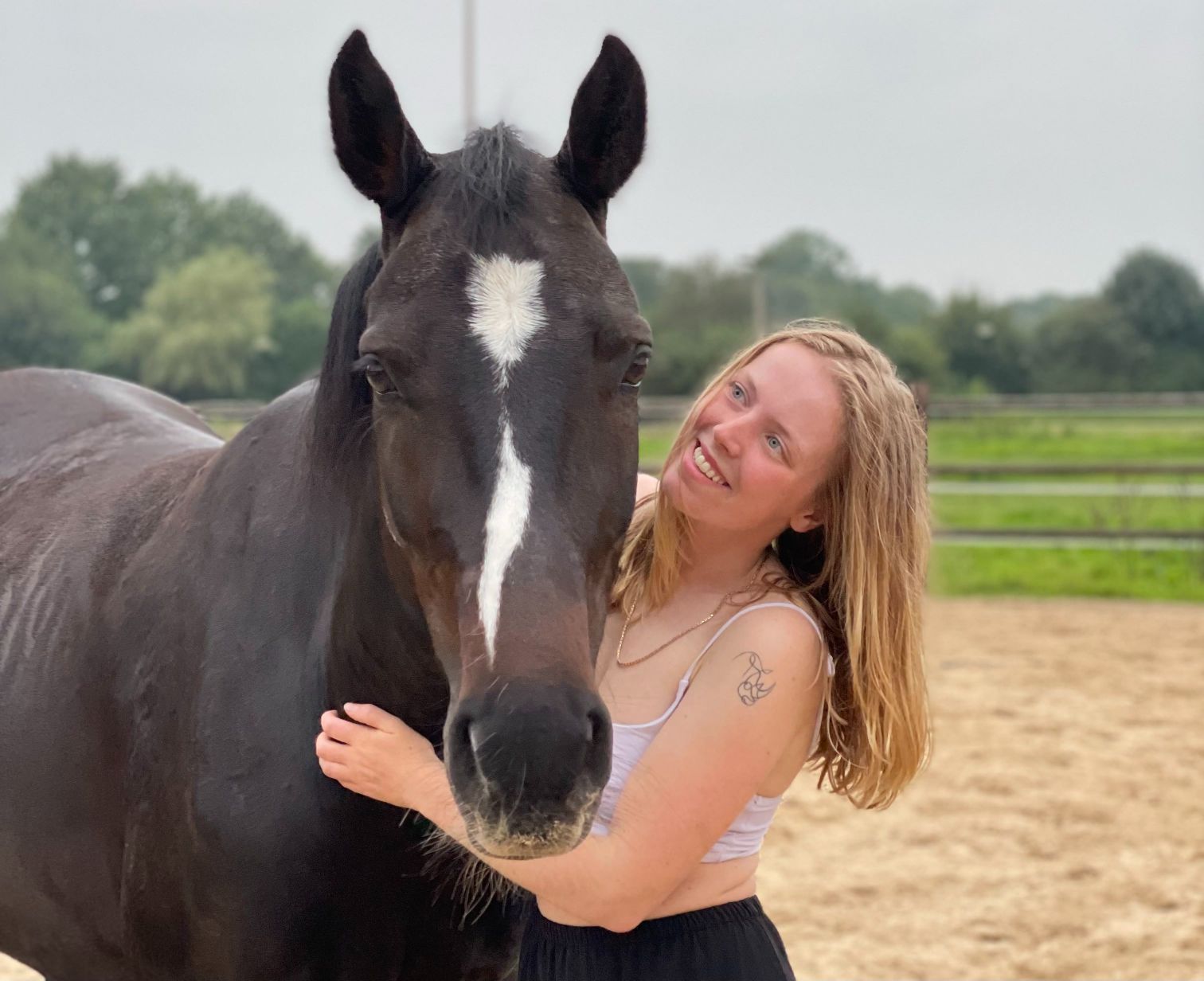 Horses are incredibly sensitive. Even the chillest or most relaxed horse is a hundred times more sensitive than a human will ever be. During my travels and work, I’ve met, ridden and trained hundreds of horses around the world. In this blog series I will go through some of the most impactful experiences I’ve had and lessons I’ve learned from the horses I’ve had the pleasure of working with.

This is the first part of this blog series, in which I will tell you about my horse Bats and what she's taught me. She's an 8 year old Shagya Arabian I backed for someone else in 2020. I ended up buying her because I fell head over heels in love with her. In the other parts I will be telling you about Pigeon, Shadow, Shukran and Ancounting, four completely different horses in South Africa. I’ll also tell you about a little pony in Mozambique called Baby. Zantos, my previous dressage horse in the Netherlands, will also feature in this series. Last but not least, the little criollo gelding in Mexico called Capricho will make an appearance. In this series I’ll start with the most recent lessons I’ve learned from horses, and take you all the way back to the beginning. The last part of the series will be about Branca, the little Welsh pony that started it all, taught me all the basics, threw me off hundreds of times, and inspired me to become a trainer. Through all these different posts about horses all over the world, I’ll also explain some differences in training methods in different cultures.

Bats has been in my life for almost three years now. When Covid started in the beginning of 2020, I had to fly back from South Africa to the Netherlands, and it turned out to be a blessing in disguise in terms of horses for me (not in terms of anything else). If I didn’t have to fly back to the Netherlands, I would've never had the pleasure of meeting Bats! Bats has taught me a lot, but one of the most important things she taught me was that I can always have more patience. I am quite an impatient person in general, and often set expectations from other people that are unreasonable (don’t worry, my friends often put me back in my place when I do this). With horses, I’ve always had lots and lots more patience than I have with people, but occasionally I’d still be impatient.

Bats has taught me to have months, even years of patience. She is a very sensitive horse, and when I explain something to her with patience, she picks new things up very quickly. She’s extremely intelligent, probably the most intelligent horse I’ve ever worked with. If I try to do something quickly, for example when I have a meeting to get to, or another horse that I have to ride, she puts me in my place immediately. Demanding me to slow down by becoming grumpy and unmotivated. In the beginning I wasn’t quite sure why her mood would change so quickly, but over time, I figured out that if I slow down and pretend to have all the time in the world, she becomes happy and relaxed again. This is something I managed to slowly implement in my daily life as well, and it has been a life changer for my mental health, and my productivity. Bats is also the horse that taught me to have even more patience in fixing issues during groundwork and riding.

A great example is a trail ride from a few months ago. She normally trots out of the gate, excited to go trail riding and go for lots of long trots and canters. However, this day she refused to go any further after going out of the gate. It was windy, and the tall hedges were moving and making lots of noise. This is already a scary area for any horse as the tall hedges on both sides limit their vision. So, there is a lot of noise, but the horse can’t see where it’s coming from. Bats started to back up, and kept backing up. Every time she backed up I waited until she stopped, asked her politely for a step forward, and she would back up again. After about 10 minutes I felt defeated, but kept being patient, and she finally took a step forward so I rewarded her with lots of lots of scratches. We went on like this for a few minutes, and she did back up a few more times, until she understood what I wanted and what I was rewarding her for. Eventually we managed to go past the scary thing, and she trusted me again. It was incredibly disappointing that she had lost trust in me and didn’t want to pass the hedges in the beginning, but with lots of patience she eventually did. All the trail rides we’ve done after this, we encountered some scary things, and I could feel how much trust Bats had in me again, and how proud she was of herself. Feeling your horse be proud is honestly the best thing in the world. Even when we had to pass a chicken farm, which smells horrible to both humans and horses, I could feel she was extremely scared, but she put her trust in me and slowly walked past the farm without backing up at all. After we passed, we trotted and she let out the biggest and proudest buck ever, she was so happy with herself. I was so proud, and Bats once again proved how big the reward can be when you’re patient with horses.

Having a conversation with horses

Since I was a kid, I’ve been good at communicating with horses. My parents are both talented equestrians, not necessarily in the sense of competitions, but they are great communicators when it comes to horses. While I do believe it’s something you either have or you don’t, it can be learned to a certain extent, and it can most definitely be improved over the years that you work with horses. As I said before, horses are such incredibly sensitive animals, and we often can't quite grasp the scope of just how sensitive they really are. This is also why I, for a long time, thought that I could communicate with horses, but never thought I could actually have a conversation. Bats, being by far the most sensitive horse I’ve ever worked with or ridden, has shown me time and time again that I can indeed talk with her, not just to her. She answers my smallest questions, asks me to explain something again when she doesn’t understand, and yells at me when my seat is off, I am giving the wrong signals, lacking intention or asking for something unreasonable. She has kept me on my toes from the very beginning, and we certainly had unpleasant conversations in the first year of working together. Horses such as Bats (and Pigeon) have a way of not giving up on being heard, and I am so glad that Bats kept trying with me. I couldn’t understand her in the beginning, and I wasn’t listening closely enough.

She would kick out, rear and protest while riding, and be grumpy during the groundwork. Even though I understood something was wrong, I didn’t take the time or effort to listen to her better, as I hadn’t learnt my lesson about patience yet. She had been trying to tell me that she doesn’t understand my questions, that she feels unbalanced, and that she needs me to help her. Now, we can have entire conversations during our groundwork sessions, riding, and hanging out in the field, and it’s incredible. All I had to do was listen more closely.

If you want to read over 40 stories about my life with horses, check out my e-book! 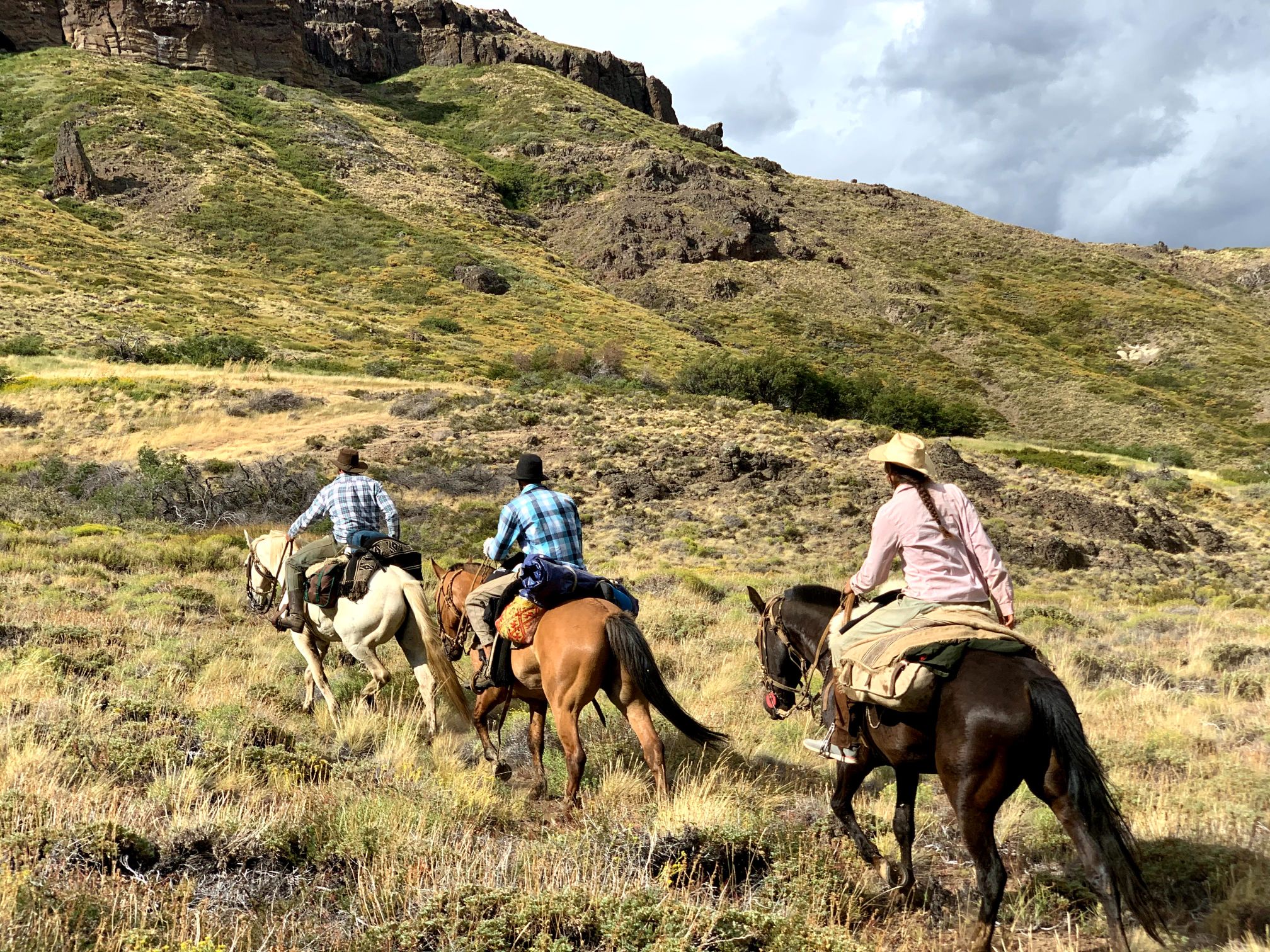 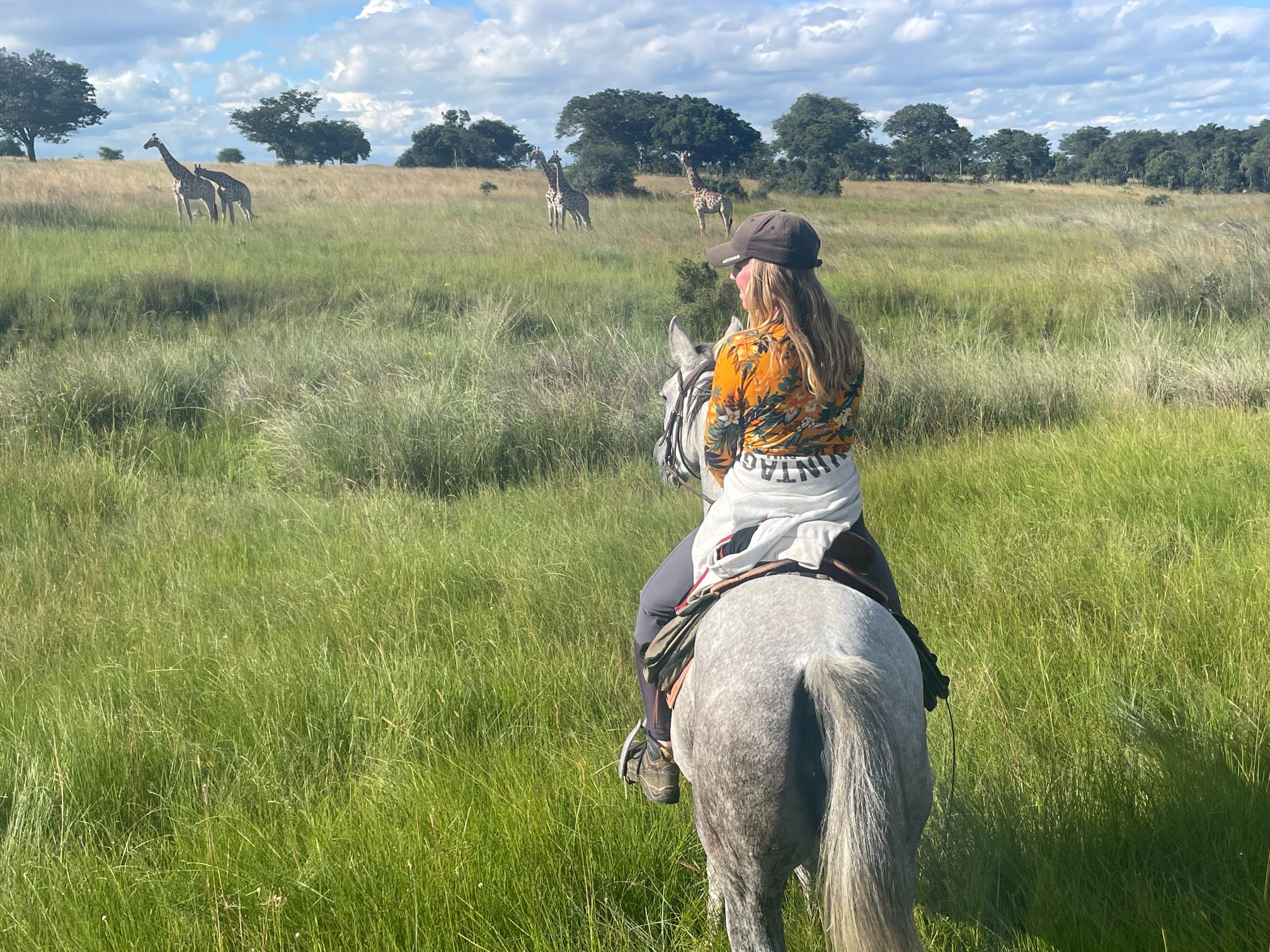 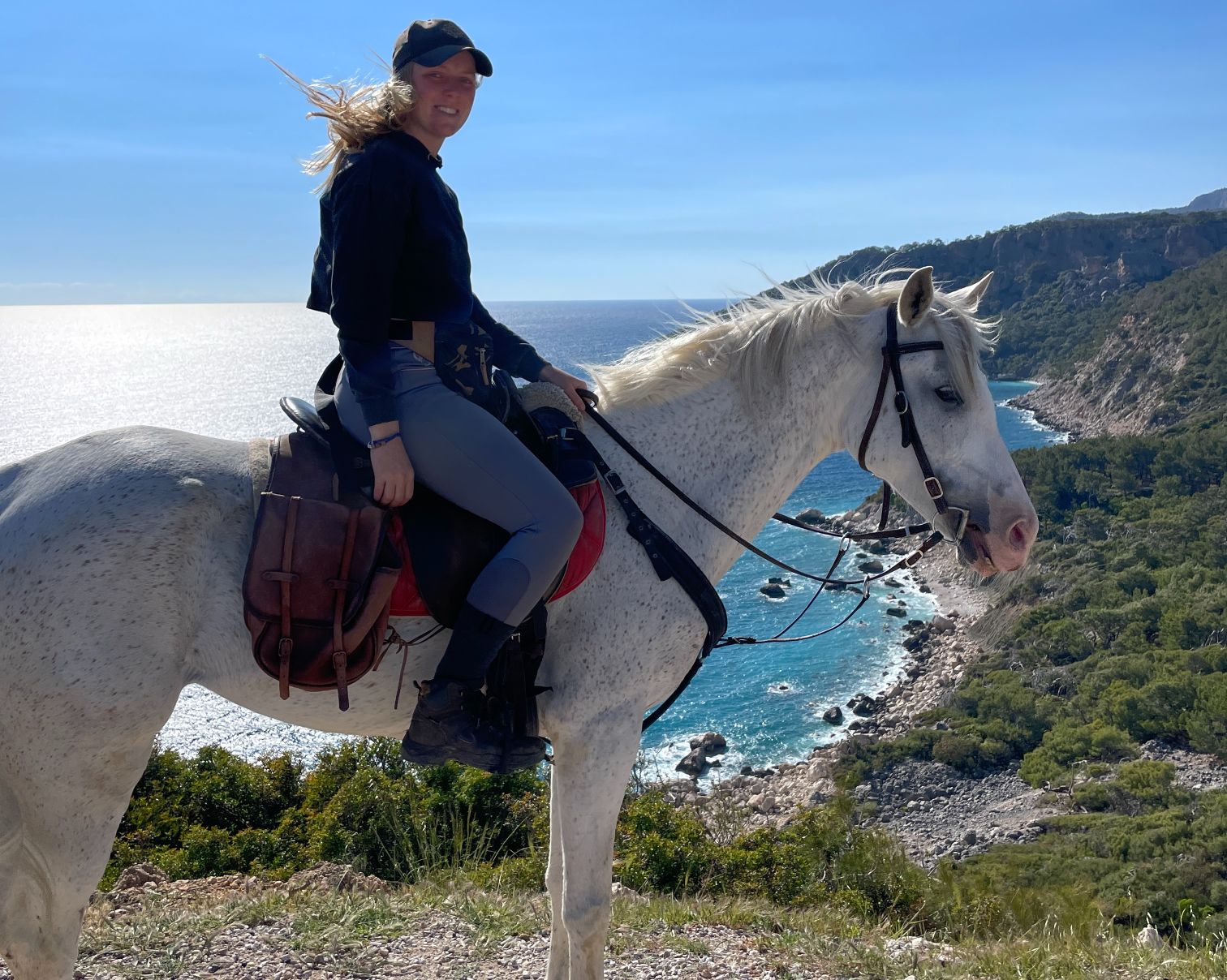